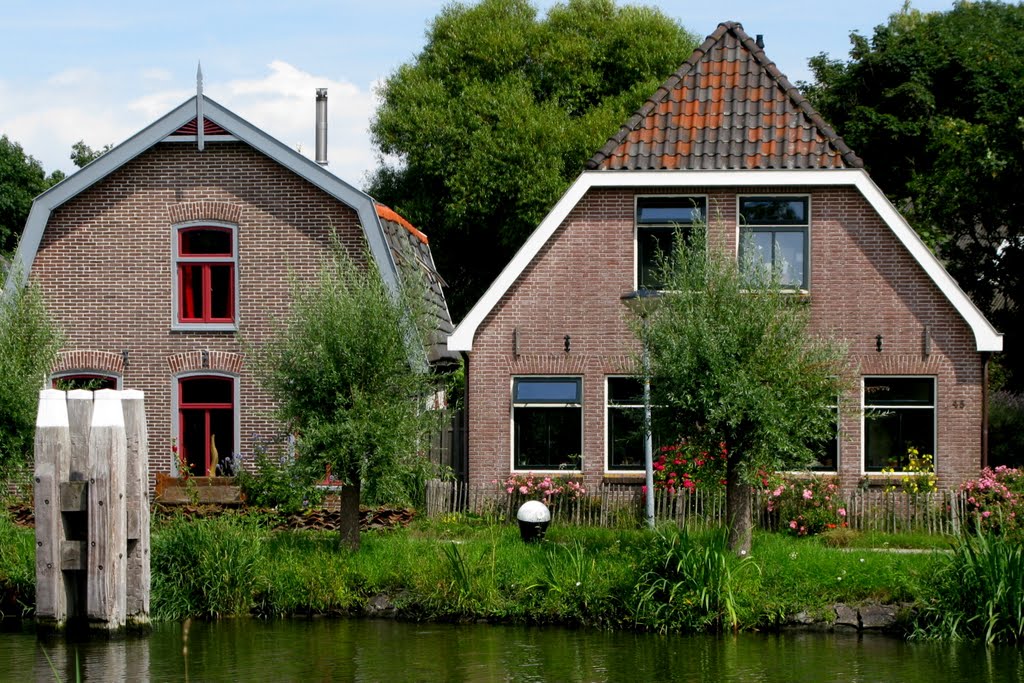 This week, my girlfriend asked if I could help to paint the roof of her house. The house looks like the one pictured above and the very top of the V shape is probably some 8 meters above the ground.
I am not afraid of heights. Just a few weeks ago I was with my son at the top of the World Trade Center and Empire States Building in New York City and I loved the view. I felt zero fear. I have been to the edge of cliffs, mountain tops. I am not one to be scared.

Yet, this week I found myself afraid.

It was just past 9 in the morning and the sky was mostly clear. There was a gentle breeze typical of The Nertherlands, one of those that will pick up and turn into strong wind soon. I picked up the roller and a tray of paint. I had been up the ladder before. A day before I was up at the top sanding down the old paint so that today I could lay a fresh protective layer. Admittedly, when I first went up to sand, someone was holding the ladder which made me feel save, I felt zero fear or discomfort.

On this bright breezy morning, however, as I started to place my feet on the steps my stomach warned me: “AAAARRGGGGHHHH!!!!”

As I gripped the ladder with one hand, tray and roller on the other, I had to move my body sideways. It was the only way to reach the very top. The ladder also was not at a perfect position, the area around its feet is busy. The ground was covered by pebbles, so I had taken a couple of pieces of wood and laid them over the pebbles so I could increase the stability of the ladder.

The ladder was being gently pushed by the wind, one more step. The higher I went the stronger I felt the wind and the more uncomfortable I became. But I was determined, another step climbed, then another and another.
At this point my emotions are screaming. I am feeling genuine fear for my safety and so I retreat. Normally, fear stops us from doing something, but I approached my emotions differently. Instead of simply retreating, I understood that the fear I felt was more like a feeling that not everything was right. Maybe the ladder’s feet were not firm enough, maybe my grip was not good, maybe the positioning, or even the paint tray. Something was amiss.
So I checked. I checked the ladder, I removed any footwear so I had my bare feet to feel better, I tested my grip of the paint tray. Checks, more checks. Once I felt assured that I had checked everything I could think of I stepped back one more time just to see if I had missed something. Satisfied I climbed again.

As I climbed each step the fear was there ever present, ever stronger, ever louder. I did my best to check my safety, I did my best to minimize any accidents. Did I miss something? No. This was the best it could be.

At this point I had an important decision to make: do I complete the task or do I stop? I felt ok with stopping and waiting for help. This option was not my desire but I accepted it was an option. I climbed down again and I took a moment. I breathed. I closed my eyes and I mentalized that I would go up the ladder and get the job done without problems. I allowed myself to mentalize the fear and to thank my emotions for trying to help, but today I wanted to complete my task more than I wanted to listen to them.

So one more time, I climbed. One step at a time. I felt the balance. I felt the sway. I felt the instability and I accepted that this was my best chance. Later, the wind would be much stronger. This was my window!

So I climbed, higher and higher. At every step the feeling grew exponentially. But the feeling was not longer screaming and drowning out everything, my fear was just present, like a red light that is just on. close to the top I felt my knees a bit weaker and it doubled my resolve. I am going to get my task done. Two more steps and I could reach the very top of the wood which needed painting. One more step. There!

As I reached the necessary height I slowed down. I used my ever present fear to help me to stay alert. I listened to the sounds, I felt the wind for any gust or change in direction. I felt the wood with my hand and instinctively searched for a grip. I was reminded of Alex Ahold on his movie Free Solo.

I placed the paint tray, freeing up a hand to grip a small edge. I felt more stable. I reached down and rolled the roller onto the paint. One more deep slow breath, hold for a second and exhale very slowly. Focused on the job, I stretched and started painting. The sound of the paint was wonderful. The red light of fear was still on, but next to it was a blue light of satisfaction!

A moment later I had completed the job. So I inspected my work and I found a detail or two which could be better. I took my time and got it as perfectly as I could. I smiled and slowly climbed down. I was still careful, the red light was still on, but I won.

This small story made me feel twice accomplished. First for being able to complete the task I set out. No matter the barrier, no matter the fear, face it and do your best. I feel that, had the wind been a little stronger or gusting, I would be justified to wait for help, but the wind was not stronger. The fear was internal. It felt like it should be faced.
I hope that this story can help you to achieve all your objectives!

Return to the blog